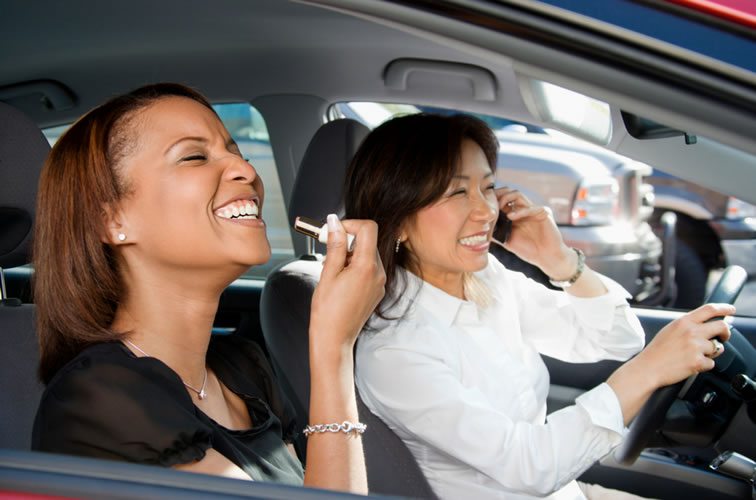 We Asked Experts About the Dangers of Distracted Driving

Smart phones and tablets give today’s consumers powerful new options for entertainment, education, and communication. However, these products are worsening the already existing problem of distracted driving.

Far too many are engaged in their mobile devices when their attention should be on the road.

This problem is especially common among teens and young adults. Responding to this challenge will require a variety of responses, including new automotive technology. Tracking sensors and digital windshield displays can help by encouraging motorists to focus on the road ahead. But tackling the distracted driving issue will also require high-profile public awareness campaigns and heightened law enforcement campaigns. Auto manufacturers, public officials, and media outlets must coordinate their efforts to have strongest possible impact.

We had the chance to speak with two of those public officials familiar with the dangers of distracted driving: Future in Focus CEO Michael Vidikan and Levinson Law Firm Partner Gordon R. Levinson, Esq.

Here is what the experts had to say:

What is your opinion on the effectiveness of large, national efforts to reduce driving fatalities from preventable causes, like those spearheaded by M.A.D.D., in regards to the influence and impact they have both on the general public and on the nation’s decision makers?

In my opinion, large national efforts to reduce driving fatalities have not been effective. While many such efforts have shown signs of promise, drunk driving statistics are actually on the rise.

Mothers Against Drunk Driving (“MADD”) was formed in 1980, and is the preeminent example of a national group working against driving fatalities. MADD is a national non-profit organization more specifically dedicated against the crime of drunk driving, and is heavily involved in advocacy through public relations.

Additionally, MADD has been instrumental in influencing lawmakers. For example, MADD was seen as the driving force behind 1984 federal legislation entitled the National Minimum Drinking Age Act that imposed federal penalties on states that did not raise the minimum legal drinking age to 21. Additionally, MADD is also widely credited as being one of the main lobbying groups when it came to reducing the legal blood alcohol content (BAC) maximum from .10 to .08. MADD-backed efforts to lobby for the change resulted in Congressional legislation in 2000, and by 2005, every state in the nation had lowered the maximum BAC to .08.

And yet, despite these apparent legislative victories, drunk driving statistics continue to rise. For example, drunk driving fatalities in the state of California alone have increased to 867 in the past year which represents a 4.6% increase over last year.

I believe that groups such as MADD have good intentions, but I believe the task of reducing drunk-driving fatalities is onerous. I also believe their work is not done. So while MADD’s efforts have resulted in positive legislative change, it is too early to judge their effectiveness as the war against drunk driving presents set-backs, it is far from won.

How much involvement should the government have in regulating distracted and drunk driving on a county, state, and/or national level? At which point would their involvement seem to infringe on people’s rights? How much responsibility should they impose on drivers vs manufactures (of cars and smart phones)? Can stricter laws and harsher penalties really make the roads safer?

According to a U.S. Department of Transportation study, 3,154 people died on our roadways in 2013 due to distracted driving. The numbers are probably a lot higher due to unreliability in reporting. According to other studies, 77% of young adults and teens believe they can drive safely while texting, 55% of young drivers think it is easy to drive while texting, 48% of people between the ages of 12 and 17 have been passengers in a car driven by a texting driver, and 1 in 5 adult drivers have admittedly browsed the Internet while driving.

While efforts to curb drunk driving have been only marginally effective, distracted driving is a far newer problem, and we have yet to see broad governmental responses. Drunk and distracted driving are crimes. And under the 4th Amendment to the U.S. Constitution, police officers may not perform searches or seizures upon citizens absent probable cause to suspect criminal activity.

Erratic driving would also likely provide adequate probable cause to suspect texting. But what about erecting mechanical devices that could detect cellular phone use in all cars that pass through an electronic field? Such a dragnet approach by the government would probably violate the 4th Amendment as being an unreasonable search — and therefore not provide constitutional probable cause — as such an approach would subject all citizens to detection even absent objective signals of distracted driving, such as swerving or other signs of poor driving. In other words, such an approach would be overly broad and intrusive.

The states have gradually increased penalties for drunk driving, with marginal success in curbing that behavior. Perhaps the time has come to enact tougher laws prohibiting distracted driving, which in my opinion should include prohibitions from cell phone use by repeat offenders.

How much responsibility should car manufactures and smart phone manufacturers (willingly) accept in relation to minimizing distracted driving accidents through the use of technological implementations? Obviously, they have no control over the devices a driver uses or when they choose to use them but, as with the possible implementation of blood alcohol detectors in vehicles preventing someone from driving if they are inebriated, should these manufactures be working toward (better) technology to prevent distracted driving?

To date, we have not seen technological efforts to prevent cell-phone usage by drivers. Assuming it were technologically possible to do so, one problem might be distinguishing between the cell phone of the driver, and those of the passengers.

Another approach may be to monitor eye movement of a vehicle’s driver though infra red or motion sensing technology. That approach would seem to avoid the issue of passenger cell-phone use, and focus only on the driver’s gaze. I would favor such an approach by auto manufacturers because it would also react to driver inattention and drowsiness — two other harmful behaviors.

What car technologies currently exist (whether in production or testing/beta) that are geared toward reducing drunk, distracted, or drowsy driving and the accidents caused by them?

Currently, technology exists to prevent drunk driving by installing breathalyzers that disable vehicles upon BAC readings above a threshold level. Additionally, technology exists that prompts a driver to focus when repeat swerving is detected. But I believe what is needed to detect texting while driving would be technology able to determine the driver’s gaze. Anything but looking forward, left, right, or behind, would result in a polite prompt from the car to encourage the driver to keep their eyes on the road!

Distracted driving awareness has seen plenty support from local people and organizations promoting its dangers to national campaigns like AT&Ts ItCanWait and Nissan’s RedThumb. What is your opinion on the effectiveness of these efforts? Is it another similar issue to draw attention to with national messaging and proper enforcement as has been the case with M.A.D.Ds success with drunk driving?

Educating drivers about the dangers of distracted driving is critical. In 2013, there were actually more driving fatalities as a result of cell phone use than drunk driving. That’s a disturbing trend. Since teen drivers are most likely to be involved in distracted driving accidents, education efforts really need to be geared to that age group.

How much involvement should the government have in regulating distracted driving on a county, state, and/or national level? At which point would their involvement seem to infringe on people’s rights?

Government has an important role to play around education and awareness, but as long as human driving remains legal, it’s going to be quite difficult to mandate good driving. Government can and should support research efforts to combat distracted driving, including perhaps the development of new technologies – from driving simulators to eye tracking sensors. I don’t think this is likely, but if society wanted to take safe driving to the extreme, human driving could be outlawed in favor of self-driving cars.

How much responsibility should car manufactures bear or take on in relation to distracted driving? Obviously they have no control over the devices a driver uses or when they choose to use them but, as with the possible implementation of blood alcohol detectors in vehicles preventing someone from driving if they are inebriated, should car manufactures be working toward technology to prevent distracted driving?

Car manufacturers are working on technologies to prevent distracted driving and accident prevention. Since many consumers choose vehicles based on their safety ratings, the free market provides an incentive to manufacturers to invest in these technologies. Cell phones aren’t the only distraction in vehicles. Changing radio stations and GPS routing can be just as distracting. BMW recently introduced a new technology concept that lets drivers use hand motions to answer calls and change the volume. Another concept being worked on is the “smart windshield” that uses augmented reality to help keep drivers’ eyes on the road. It could display vehicle speed and the posted speed, GPS directions, fuel alerts, important messages, and even highlight dangerous objects on the road. Of course, manufacturers would need to find the right balance so as not to overload the driver with too many heads up distractions.

No amount of intervention can eliminate all the dangers of distracted driving.

Human beings will always be vulnerable to the effects fatigue, stress, and substance abuse. Nonetheless, it is possible to minimize the effects of drunk and distracted driving by using safeguards like those discussed above.

Government and industry initiatives might never fully address the problem, however.

Drivers must do their part by exercising personal responsibility and practicing etiquette when operating a motor vehicle. A concerted effort from both public and private entities is essential to saving lives, protecting property, and ensuring the public roadways remain safe for all who use them.

Curious how you can do your part to mitigate the distracted driving epidemic?

Start by committing to – not only yourself – but your loved ones and take the pledge to avoid distracted driving.