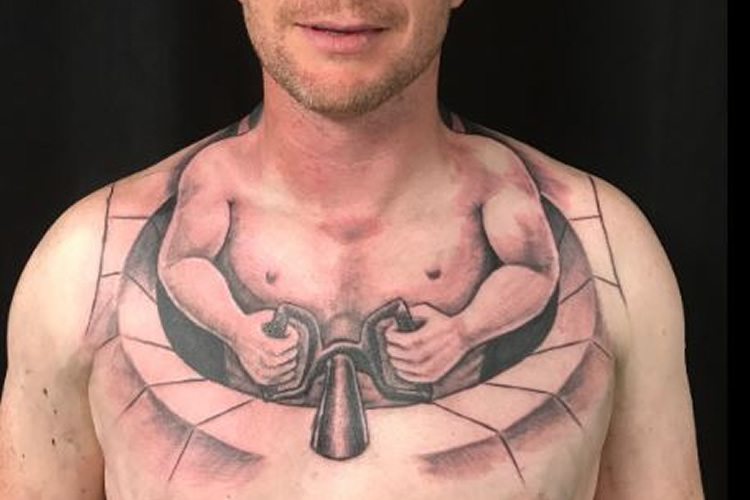 This man's tattoo of his head driving his body has gone viral.

One man has a taste of fame thanks to posting a picture of his very first tattoo. People all across the world are fascinated with Kenny Ollerenshaw’s clever tattoo because it looks like a small man driving his body. He posted a picture of the partially-complete tattoo online and the photo has gone viral since.

According to Ollerenshaw, a 36-year-old truck driver who lives in Cumbria, he is incredibly pleased with how the makeshift car tattoo came out as well as the attention he’s received for his fresh ink. Even his five-year-old son couldn’t help but admit that the tattoo is very “cool.”

Kenny said, “I went in with the idea of having a tattoo which looked like mechanical moving parts.” As a trucker, Kenny is fascinated with engines, cars, and mechanical parts. After this tattoo, he hopes to get body art of all things cars on his shoulders and arms. Richard Batey, the tattoo artist, actually showed Kenny the design and Kenny liked it enough to go with it. Richard Batey had originally come up with the idea for another client but decided Kenny was the right canvas for the design.

According to Batey, he had showed the tattoo design to the original client. However, the client didn’t like the design, saying, “It was too much.” When Kenny came to the shop, he had no previous tattoos. Originally Kenny wanted two sleeves but, when he saw Batey’s design, he instantly fell in love.

When Kenny posted the picture of the partially-complete tattoo online it was only sketched on his chest. The artist still needed another four hour session to complete the work. The tattoo still needed a lot more shading and detail. Richard also plans to draw tattoos on the tattoo. Essentially, the arms of the little man driving Kenny’s body will also have tattoos. According to Richard, he has plenty to do and multiple sessions booked. However, he’s thinking of bringing the booked sessions forward because he was sick of seeing pictures of the incomplete tattoo.

Richard predicts that many people will be getting this tattoo because it causes people to have “such a double take” when they look at it. Amusement and shock are both common reactions.

The recipient is in disbelief about his sudden fame, admitting, “It’s slightly unbelievable, it just keeps going. You get up in the morning it has been posted somewhere else by somebody else. It’s all a bit of a mad journey.”

You Won’t Believe What Your Car Choice Says...

The Hidden Costs Of Car Ownership You Can’t...

Mom Makes Example of Teen Who Crashed While...

5 Tips To Avoid Scammers When Selling A...

Driving And Safety Tips: How To Drive On...

Does Auto Insurance Cover Theft? (And How To...