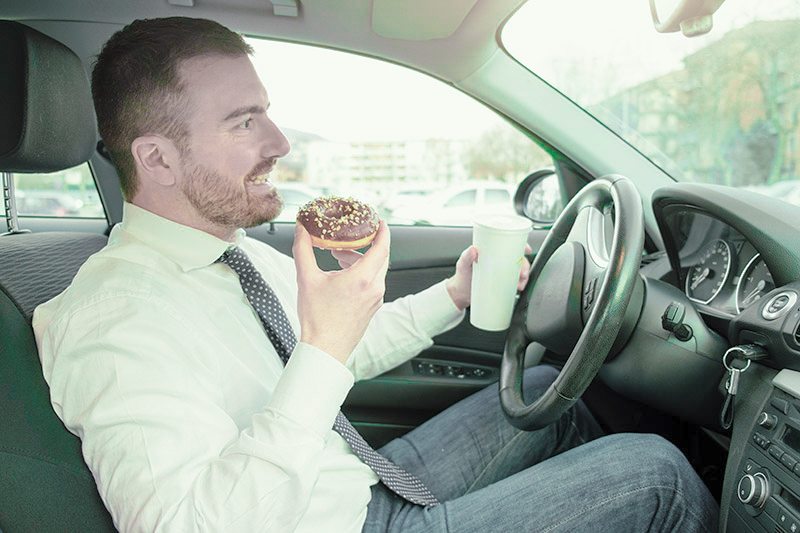 Is eating while driving dangerous? You may think there’s nothing wrong with having a quick snack while heading to work, but it is not as simple as it looks.

Eating while driving is a serious matter that you should always say to no to it.

As many people regard distracted driving to drunk driving or texting while driving, there are also other forms of getting distracted which includes grabbing your breakfast burrito while on the road.

The same also applies to drinking while driving since your hands should be handling the steering wheel and not your morning coffee.

According to Lyxt, a global driver risk management company, a driver who is drinking or eating while driving is 3.6 times more likely to get involved in a car crash than focused drivers who stay away from any distraction.

In similar fashion, the National Highway Traffic Safety Administration (NHTSA) has estimated that eating or drinking while driving increases the chances of getting involved in car crashes by 80%.

NHTSA also pointed out that 65% of near-miss car accidents are caused by drivers who are eating while driving on the road.

It appears that underestimating the effects of eating while driving could lead us to terrible consequences.

Most dangerous food to eat while driving

After some research on eating while driving, NHTSA has come up with a list of food items that are dangerous to have while on the road.

SEE ALSO: Is It Illegal to Eat and Drive? Food and Distracted Driving Laws

How To Avoid Distracted Driving?

There’s no law that stipulates that you are not allowed to eat while on the road, but you could potentially be pulled over if caught driving recklessly while grabbing your meal.

Hence, the only way to avoid distracted driving is to refrain from having a meal while on the road. Drivers are advised to eat at home or wait until they get to their destination.