Impatient Dog Takes Action While Waiting In Car For Owner 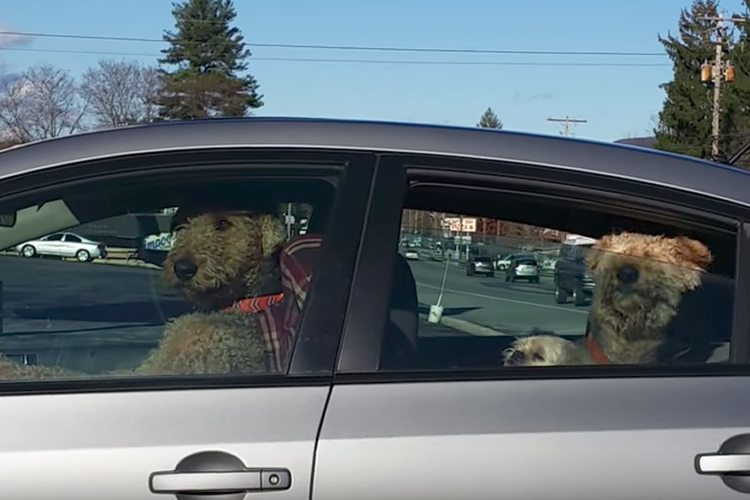 Many people like to take their beloved pets with them on errands. Unfortunately, many businesses don’t allow pets inside. As a result it is a common occurrence for pet owners to leave their pets in the car with the windows down while shopping at the grocery store or getting an examination at the doctor’s appointment. Recently one pet owner decided to do this with their pet Airedale Terrier only to discover that their pet is actually incredibly and hilariously impatient.

Impatient Dog Takes Action After Waiting In Car For Owner

A man posted a video taken by a witness which went viral on the Internet. If you watch the video you’ll notice, at first, the repeated honking of a car horn. However, if you take a closer look, you’ll find a dog rather than a human is the culprit honking the horn. Meanwhile, its owner is shopping in a convenience store and is apparently taking his sweet, sweet time but this man’s best friend refuses to be kept waiting without taking a stand.

The honking in the video only ceases when the dog spots its owner leaving the convenience store. YouTube user Melissa Bailey, who happened to be at the parking lot, couldn’t help but laugh as she watched the fed-up dog honk the car’s horn and had to walk up to the vehicle to video capture what she was seeing.

When the dog’s owner initially left the car to go to the convenience store, he had passed by Melissa’s car window and she told him that it looked like his dogs were having a lot of fun. The dogs’ owner simply smiled and went inside the convenience store. However, as soon as the dog’s owner entered the store, the Airedale Terrier hopped from the back seat and into the driver’s seat.

At one point the impatient dog stopped honking the car. However a long blast from the car’s horn ensued and the Airedale Terrier was right back at it again. Meanwhile, another dog was sitting in the backseat waiting for his owner to come back. At one point the persistent pup seems to recognize the camerawoman before continuing to honk, entirely undeterred.

When someone else in the parking lot exited their car, the Airedale Terrier in the front seat let out a short honk. Melissa was still watching and recording and the man looked at her as if it was her who was honking the horn. She simply laughed and said, “It wasn’t me! It was the dog!” Both the man and Melissa watched as the dogs waited for their beloved owner to return.[/fusion_text][/fusion_builder_column][/fusion_builder_row][/fusion_builder_container]

Van Life Essentials: Must Haves for Traveling and Life on the Road

How To Quickly Get A Duplicate Title In...

Running Out Of Gift Ideas? Try Buying A...

Get In The Labor Day Weekend Groove With...