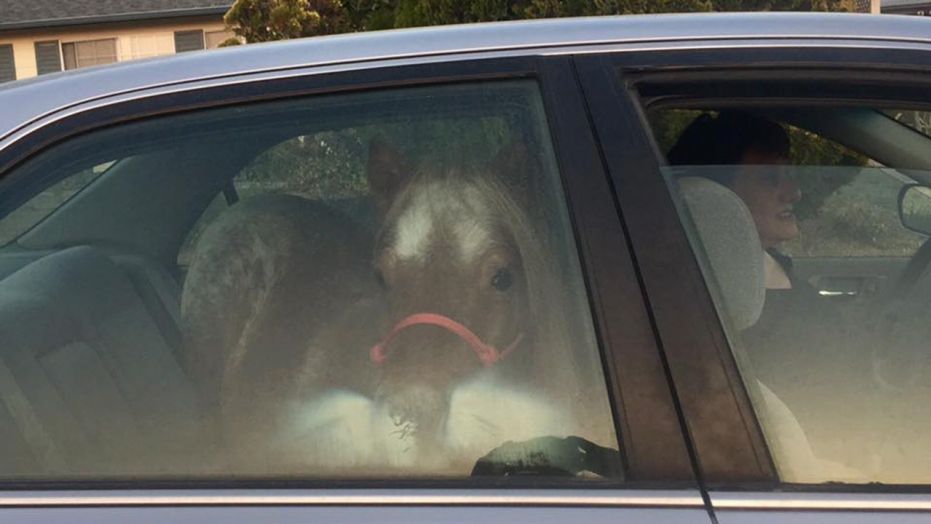 Wildfires have been raging in California over the past few weeks, with thousands being evacuated from their homes to escape danger. One such resident, a nurse named Lauren Mesaros, was forced to flee from her home in Santa Rosa in California’s wine country. The Tubbs Fire was creeping up on neighborhoods in Napa, Sonoma and the surrounding areas, and she was at risk of losing everything.

Mesaros packed up her treasured possessions and was preparing to leave when she remembered that she needed to save her three horses as well. The problem was that her horse trailer was only able to carry two equine passengers. Faced with the impossible choice of leaving one of her beloved horses behind to fend for itself, she pulled together all of the ingenuity she could muster and came up with an incredible solution.

One of her horses was still just a pony, and she was able to coax it into the backseat of her 2001 Honda Accord. She was amazed how amenable the pony, dubbed Stardust, was to this arrangement. She told local newspaper, SF Gate, “He actually walked right into the car like a dog would.” Her sister-in-law snapped a photo of the adorable pony nestled in the backseat and posted it to her Facebook page. The post has since gone viral, generating nearly 20,000 shares on the platform.

For the time being, Stardust and the other two horses have been relocated to Wind Horse Ranch in nearby Sebastopol to wait for the fires to be fully put out so that they can return home. Luckily for Mesaros, her home was not ultimately damaged by the flames.

Mesaros’s heartwarming story is a testament to the things we can do when spurred on by love for our pets. Without her quick thinking in the face of crisis, Stardust’s story may not have had such a sweet ending. As the fires continue to blaze, we can only hope that more people are inspired by her story and take it upon themselves to save other animals in danger as well.

You’re Probably Overpaying for Car Insurance. Here’s How to Check

California Smog Requirements: Can You Renew Without Smog?

This US State Has Approved Driverless Cars On...

At least they are all safe! Its a shame that the same cannot be said for the rest of the animals in the wildfires!

Am I the only one that this story makes think of the TV series Wildfire? It was about a horse named Wildfire that was originally helped to escape being sent to a slaughterhouse.

Not familiar with the show but interesting observation!

Although this is pretty funny/cute, isn’t it also a bit concerning for the health of the horse? Would the horse be safe for a car ride without the ability to really move around?

Imagine it’s better than the alternative…

Wow – that’s crazy! But at least it all worked out. Animals can be so smart but sometimes their fear can keep them from doing the smart thing. Luckily this situation worked out! I wonder who else has similar stories!