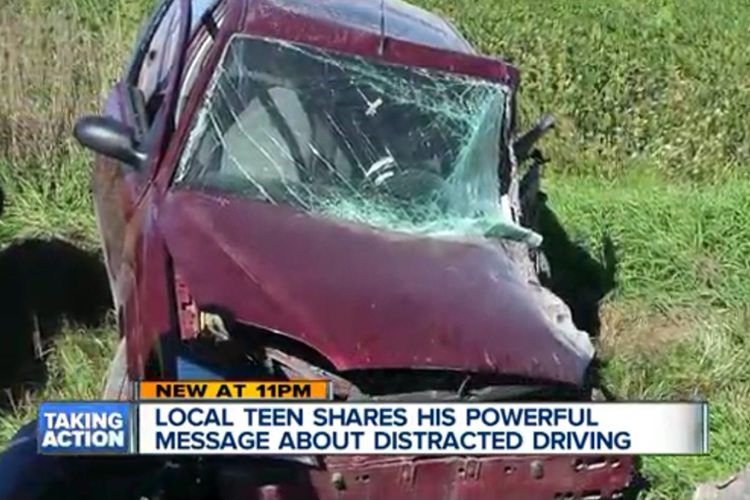 Mom Makes Example of Teen Who Crashed While Texting and Driving

Every year, about 2.5 million traffic accidents occur in the United States. Of these 2.5 million traffic accidents, about 64 percent involved a mobile device like a smartphone. In accidents caused by distracted driving, about 3,179 people died in 2014. Matt Reeves, a 17-year-old, is one of many who have learned their lesson about the dangers of distracted driving – especially among teens texting and driving. Fortunately, he is still alive to tell the tale.

Why is texting and driving a problem for teens?

In September of 2016, Matt Reeves was driving around town with his mother’s car with his cell phone positioned on the center console. When the cell phone slipped and fell under the pedals, rather than pulling off to the side of the road, Reeves opted to slow down by easing his foot off the gas pedal. The result was as you might imagine. Following the impending accident, Reeves recalled:

I didn’t feel like it would be that long to grab it, but when I came up it was too late.

In the few seconds that it took for him to retrieve his phone, he crashed into an SUV that had been waiting to turn.

When recounting his near-tragic brush, Reeves continued, “I saw the rear end of the black SUV and I just remember hitting it really hard.” Fortunately the driver of the SUV was a nurse and immediately rushed to his aid, keeping Reeves stable while waiting for emergency crews to arrive to the scene.

While this lucky teenager emerged alive, he suffered severe injuries including fractures to his eye socket, nose, skull, and jaw. He also had a serious concussion, an injured shoulder, and a nasty gash in his forehead. Even though his injuries were very severe, Reeves recognizes he was lucky the situation wasn’t as bad as it could have been. He knew that he could have lost his life or taken someone else’s by choosing to text while driving.

Why do teens text and drive?

After the texting and driving accident, Reeve’s mother wanted to make an example of her son to help prevent accidents like this from occurring to others. She shared Reeve’s story on Facebook and ended her post by demanding:

Put the damn phones off and in a place you can’t be tempted to reach for it. Matt was lucky. This could have had a different outcome.

After just two months Matt managed to make a full recovery, pledging to never use his phone or text while driving again. After all, he knows the dangers of distracted driving from firsthand experience.

Matt and his parents have expressed their desire to continue raising awareness about the dangers of texting and driving and other forms of distracted driving. Each day, 11 teenagers lose their life because they were texting and driving. Linda says that she has already heard from friends, relatives, and even strangers about how they’ve changed their driving habits after reading Matt’s story. Just one person changing their driving habits could mean one life saved, which is why Matt and his parents are pleased about the impact sharing their story has made so far.

Watch their plea against texting and driving below.