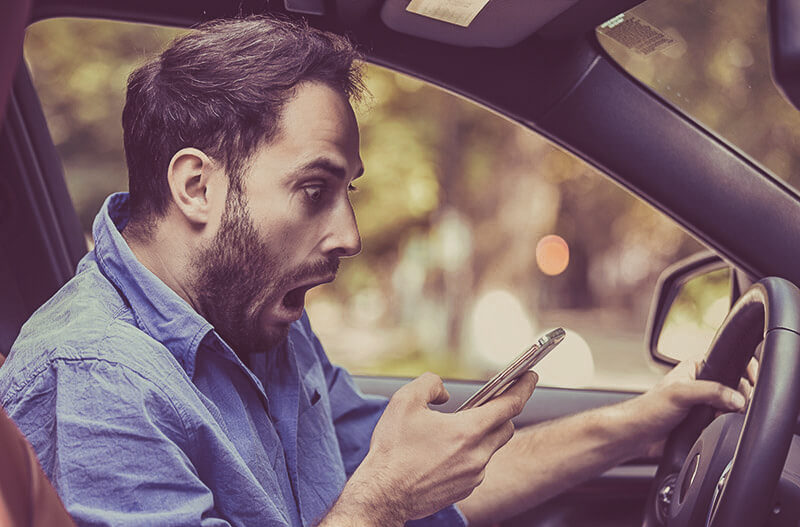 Are You Guilty Of These Bad Driving Habits?

Quitting bad driving habits may be hard to achieve, but it is worth trying.

If you have developed certain habits that could put you in danger, today is the time to do something about it.

Be mindful. Everyone can be a driver, but only few people become crash-free drivers. From previous safety reports, it is estimated that 15,913 road accidents occur every day in the US.

The number is alarming. Yet we could start making a difference by quitting terrible driving habits to lower our alarming driving statistics.

For that reason, here are 10 bad driving habits you will need to quit to remain crash-free.

Tailgating means driving too closely behind another vehicle.

This habit can put you at risk, especially if you use the vehicle ahead as a reference to predict your next move.

According to the National Highway Traffic Safety Administration (NHTSA), 23% of all motor vehicle accidents are associated with rear-end collisions.

These collisions cause 2000 deaths and 950,000 injuries every year. Now, things get even tougher when road conditions worsen considerably.

As basic as it looks, you could be in danger if you refuse to use your signals when you are supposed to.

If you are approaching an intersection and need to make a right turn, signal your intentions to turn at least 100 feet prior to turning.

This will give you enough time to alert others of your intentions to turn, reduce conflict, and be in control at intersections.

Middle lane hogging means overly using the middle lane, mostly when there are no vehicles to pass which could be frustrating for others.

If you are overtaking slow-moving vehicles, you are expected to return to the left side of the road.

Not only does middle-lane hogging causes more congestion, but also depicts selfishness.

Overtaking is a maneuver that you need to complete with caution. However, there are certain situations in which passing should be avoided.

For example, it is unsafe to pass other vehicles when driving through an intersection, a top hill, or a curve.

Most states also prohibit passing on the right unless the vehicle ahead is turning left or the road is wide enough to accommodate two lanes of traffic.

Wouldn’t it be better to remain in your lane until it is safe to undertake?

5. Slow driving on the left lane

Most states require slow drivers to move to the right lane by law. Slow driving not only creates more congestion, but also increases your chances of crashing.

Lane-switching causes about 10% of all highway crashes in the United States.

When slow drivers are scattered across the road, passing traffic increase the number of times they need to switch lanes, leading to accidents.

If you are a slow driver, remain on the right lane for your own safety.

6. Running a red light is dangerous

Running a red light may be accidental, but it is still 100% unsafe. If you run a red light, either accidentally or intentionally, you’ll be exposed to a severe crash.

Importantly, running a red light is not just dangerous, but it is also against the law. It’s better to get to your destination a little late than not arriving at all.

7. No texting while driving

Of all the bad driving habits handling your phone while operating a vehicle is the latest distraction you should avoid.

The NHTSA reported that 3,166 people were killed as a result of distracted driving, which includes texting or calling while driving.

Next time you hit the road, put your phone down and keep it far from you to avoid being at risk. You are also advised to check your phone before and after reaching your destination.

Remember: No call or text is important enough to put your life at risk while on the road.

8. Not wearing a seatbelt

Buckle up before starting your journey. It’s the law and you are not only reducing your chances of severe injuries, but also creating a safe culture.

According to a recent research on seatbelt usage, Gen Xers are more consistent about buckling up compared to baby boomers and millennials.

This study also suggests people are more aware of seatbelt usage, which is a major improvement today. And another reason why you should quit not buckling up.

Listen to music could be distracting, but wearing headphones can even impact your safety even more.

You don’t want miss on certain noises that you need to watch for to avoid unexpected incidents.

There may be a train crossing the road or an emergency vehicle sounding its siren. You will need to remove your headphones to hear those noises on time.

Not to mention that wearing headphones while driving is against the law in some states.

10. Driving over the speed limit

Another habit that impacts your safety is driving over the speed limit on any road.

By speeding to a dangerous point, not only are you driving too fast for road conditions, but you are also acting against the law.

In 2017, 9717 Americans died owing to speeding which urges drivers to be extra cautious when accelerating.

Speeding can also take a hit on the environment. Ford Motor Company reported that driving over 65 mph wastes approximately 15% more fuel than driving at 55 mph.

When a vehicle consumes more fuel, the atmosphere becomes more vulnerable to CO2 emissions. Watch out!

Driving can be tough. And your ability to drive a vehicle safely depends on the approach you take to your own safety.

When it comes to bad driving habits, you experience is irrelevant. You are still exposed to a margin of error that could be enough for a disaster.

If you know any other driving habit that should be added to the list, please let us know in the comments below.

Top 9 Safety Driving Tips For A Great 4th Of July

How To Survive Severe Traffic Congestion – Do It Smartly

What Happens To Your Old Tires When You...

Drive Sober or Get Pulled Over: Drunk Driving...

How to Hold the Steering Wheel and What...

How To Keep Your Kids Safe In The...

How To Drive Safe In The Rain